Copyright: ©2022 Vyom Mori, This is an open-access article distributed under the terms of the Creative Commons Attribution License, which permits unrestricted use, distribution, and reproduction in any medium, provided the original author and source are credited.
Received: 13 June 2022| Accepted :2 July 2022|Published:04th August, 2022
Keywords: RADPAD; radiation exposure; lower the better

Method: The shield used is commercially available RADPAD which is lead free, composed of a bismuth and barium with lead equivalency of 0.125 mm. 152 cases of diagnostic and therapeutic angiograms were allotted in 2:1 manner with or without the RADPAD. Screening time, Cine adjusted screening time (CAST), radiation dose of primary operator was measured in all procedures. The  primary endpoint was to see the reduction in ratio of primary operator dose relative to CAST in those with RADPAD.

Cardiac catheterization laboratory is essential for therapeutic as well as diagnostic procedures in field of cardiology.  Ionizing radiation remains an integral part of this laboratory. For staff members employed in a cardiac catheterization suite, chronic exposure to low-dose radiation confers a small but stochastic risk for inducing malignant disease, skin damage, or eye problems(1,3).There is six fold increase in radiation exposure and nearly 40 % of the increased exposure is related to Cardiovascular imaging and intervention(4). Significant radiation exposure has the potential to impact the health and well-being of interventional cardiologists and diseases like Brain Tumors (5,7), Cataracts(7), Thyroid Disease(8,9), cardiovascular diseases10, are reported in various studies. Atomic energy regulatory board (AERB) has recommended Whole body (Effective dose) as 20 mSv/year averaged over 5 consecutive years. Radiation exposure has been accepted as an occupational hazard for interventional cardiologist and other health care providers (HCP) who work with X ray-based imaging in general (1). However, it is very imperative that principle of ALARA (as low as reasonably achievable) should be practiced in every lab wherever HCPs deal with hazardous radiation. The RADPAD (Worldwide Innovations & Technologies, Inc., Kansas City, Kansas) is a sterile surgical drape containing radiation protection materials (bismuth and barium), placed appropriately on the patient between the imaging beam and the primary operator. It is known to reduce scatter radiation exposure to primary operator in routine catheterisation procedures. We sought to assess the efficacy of RADPAD drapes in reducing radiation dose experienced by operators during routine catheterization procedures in our hospital.

Study was a single centre experience of RADPAD use during catheterization procedures. This was a prospective observational study using radiation protection shield (RADPAD, Worldwide Innovations and Technologies Inc, KS, USA), which is lead free and composite of barium and bismuth. The shielding properties are certified by the manufacturer as 0.125 mm lead equivalent.
One RADPAD shield (Femoral 5300A- Y/Multipurpose 5511A-Y) was used for this study and were placed as per the standard placement instruction from the manufacturer as shown in Figure 1. 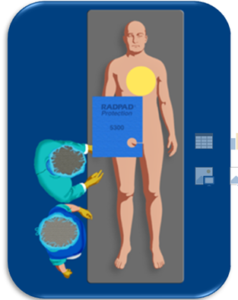 FIGURE 1: Figure showing appropriate placement of RADPAD during femoral/radial procedures.
All shields were used once only. All procedures were performed in a standard PHILLIPS FD20 Cath. Lab (Catheterisation laboratory), and with usual attention to good radiological practice such as careful collimation, hanging lead curtain beneath the patient table, movable leaded glass shield fixed to the ceiling. Standard personal shielding including a lead apron and protective thyroid collar were worn by the operator. The study was performed as part of a quality assurance program with a view to monitoring and reducing dose to staff in the interventional lab with no intervention done on patient, so local ethics committee approval was waived.

Study was all comers where use of RADPAD was allotted in 2:1 pattern to “with RADPAD” (Study Group) or “without RADPAD” (Control group). Radiation exposure to primary Operator (referred as primary operator dose) was measured using ALOKA PDM 127 personal dosimeter placed over left chest above the lead apron. Recorded doses were from the primary operator dosimeter for all the procedures (DOSE). Total fluoroscopy time and no of cine acquisitions were recorded for each procedure (ST). Patient and procedural details were recorded prospectively. To consider the factor of radiation exposure on account of CINE, which emits approximately 15 times (11) more radiation than fluoroscopy (non cine screening), we derived cine adjusted screening time (CAST), using average cine duration (observed to be 4 second), factor of fifteen and number of cine acquisition. The primary operator dose was then designated to CAST for relative dose exposure (Primary operator dose/CAST). The primary endpoint of the study was to see reduction in ratio of primary operator to CAST in procedures with RADPAD compared to control. The secondary objective was to see reduction in total radiation dose in the study group.

RESULTS
A total of 152 procedures were part of this study. Five were coronary angiograms and 147 were therapeutic interventional procedures. The basic demographics of the study population are enumerated in Table 1.

The procedural data and radiation measurements are enumerated in Table 2.

TABLE 2- Procedural data in both the study groups.

Our study has shown that with use of radiation shields (RADPAD) there was 60% reduction the ratio of primary operator to CAST and 54% reduction in the total operator dose exposure. The reduction in radiation exposure has been found to be statistically significant. Scatter plot analysis of the groups has been shown in FIGURE 2

The higher reduction in radiation dose in our study was due to use of dosimeter at chest level because that’s the maximum exposed part to radiation. Besides this RADPAD also prevents the relative radiation exposure at chest level compared to other body parts (12). In RECAP trial, use of RADPAD in catheterization laboratory lead to 20% reduction in relative dose exposure compared to NO RADPAD group and 44% reduction compared to SHAMPAD group (13). Use of drapes in CRT (Cardiac resynchronization therapy) has lead to 65% reduction in dose exposure and hand level and 40% reduction at eye level (14). RADPAD use during coronary angiography lead to 59% reduction in relative radiation exposure to the primary operator even during angiography (15). In an Indian study of 65 patients the drape reduced the radiation exposure to the operator by 39%.16 The study also concluded that maximum radiation is in left anterior oblique projection (16). Our study has shown the primary operator dose reduction of similar magnitude. Usually in diagnostic angiograms the radiation dose is 2-3 mSV but during complex PCI like bifurcations, CTO (Chronic total occlusion) or multivessel disease the exposure rises to as much as 10-15 mSV. The interventional cardiologists have an adjusted odds ratio of 4.5 for cancer, 9 for cataract, 1.7 for hypertension and 1.9 for hypercholesterolemia due to long hours of radiation exposure (17). Our study also measured the radiation dose exposure at patient level, which was found to be reduced by 17% in study group compared to control. Thus on addition to traditional radiation protection devices it becomes amenable to use this drapes. The goal should be to achieve as low as possible radiation exposure to the operator and prevent long term occurring occupational hazards.

There are three limitations of our study. One is our study is prospective observational study but however we tried to balance the baseline charecteristics between both groups. Second is we measured operator dose exposure only at the chest level rather than measuring at other body parts. Third is its limited experience single centre study.

The study showed the use of RADPAD leads to significant reduction in radiation exposure to the primary operator. Thus, with use of drapes the goal of ALARA can be achieved. How its going to effect the long-term consequences of radiation in health care workers is yet not determined. Hence whenever possible for those working long hours amongst radiation use of sterile drapes for preventing the exposure should be considered.

🔥 Black Friday might have ended, but the exclusive WPDeveloper Deals are still ON! Don't miss the chance to grab HUGE discounts for lifetime access to 10 premium products, worth over $6000. 🚀 Find out more detail right here. 👇 #BFCM2022 #LTDs

Huge shout out to @LayerWP for including the WPDeveloper Agency Bundle & all our top products in this amazing list of the best WordPress #BlackFriday deals! 🥳 Check it out & grab the best #WordPress offers before they are gone.👇

🥳 The WPDeveloper Agency Bundle got an exclusive mention in this amazing roundup video of the top 6 #WordPress Lifetime Deals by @davidswift! ⚡ Check it out & grab the BEST #LTDs for your websites today. ⭐

🔥 IT'S BLACK FRIDAY: Get Up To 80% Off 🔥 Seize the BEST WordPress deals of the day & boost your web-building experience with exclusive lifetime access to 10 premium products! 🎁 #WordPress #BlackFriday #CyberMonday

No need to worry about finding the best #WordPress deals, @WPManageNinja has you covered with this epic roundup of the best #BlackFridayDeals that includes Essential Addons, NotificationX, and much more! 🔥

Huge thanks to @wpmayor for including us in this amazing list of the best WordPress #BlackFriday deals! 🥳 PS: These deals are running out fast, hurry and grab them before they are gone! 👇

🔥 Your Black Friday just got better! 🔥 Huge shout out to @thewpweekly for including us in their incredible roundup of the best WordPress #BFCM2022 deals. It includes Essential Addons, NotificationX, Templately & much more! Check it out here👇

Some of our most popular marketing plugins - NotificationX & Templately - got featured by @rankmathpro. Check out their MEGA sale and grab the best SEO deal for #WordPress! 🔥 #BFCM2022 #RankMath

⚡ Do you want to know the right customer engagement tools to boost your sales? Check out this blog to know more. 🔥 #customerengagement #conversions #sales

💥 SAVE BIG ON BLACK FRIDAY 💥 Our MEGA sale of the year comes with a whopping 91% OFF on the 10 best WordPress products. Power up your website with WPDeveloper Agency Bundle! 🚀 #blackfriday #BFCM2022 #lifetimedeal

© 2021 Olites Publishing. All rights reserved. No part of this content may be reproduced or transmitted in any form or by any means as per the standard guidelines of fair use. Creative Commons License Open Access by Olitespublishing is licensed under